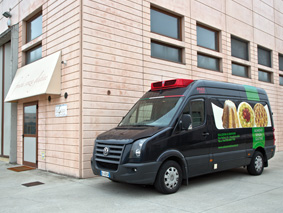 A gluten-free idea
Soluzioni Alimentari was set up with the aim of meeting the needs of the increasing number of people who have a gluten intolerance, and has met with the approval of a large customer-base over the years. In recent years the company has focused on producing gluten-free and lactose-free pizza bases made with high-quality dough, and supplies pizza parlours, specialist outlets, supermarkets and the large-scale retailers throughout Italy and other countries in Europe, such as Germany, Austria, Switzerland and France.

Luigi Bonomini, the owner of Soluzioni Alimentari, was diagnosed with coeliac disease in 1992.
A few years later, his sensitivity to an issue which had affected him personally, combined with his culinary experience, led to the idea of setting up an artisan business for the exclusive production of fresh, gluten-free pasta.

No need to give up on taste
Soluzioni Alimentari started operating in 2001, providing products of high culinary quality for sufferers of coeliac disease.
The company specialises in products for people affected by coeliac disease, but it also understands the art of good cooking - you'll only be giving up gluten, not the pleasure of eating a delicious pizza!

A background of flavour and transparency
On 06 November 2001, Soluzioni Alimentari received approval from the local health authority to commence production on its premises and sell its products to the public at the shop in Nuvolento, in the province of Brescia.

On 27 February 2003, the company was one of the first artisan producers of fresh pasta in Italy to obtain authorisation from the Ministry of Health (authorisation no. 2003/13) to sell fresh gluten-free products.

A significant increase in demand from distributors throughout Italy led to the decision to cease trading to the public and focus on the production side of the business. As a result, in November 2014 the company moved to the new, larger production premises in Mazzano, in the province of Brescia. Requests then started arriving from abroad, and the gluten-free pizza base produced by Soluzioni Alimentari started to break into new markets in the rest of Europe.

Over the years we have continued to improve our products, obtaining endorsements from the Ministry of Health in order to market them. Soluzioni Alimentari is committed to providing customers with the highest level of assurance and transparency.

Quality guarantee
We solely produce gluten-free products to provide the certainty that there are no traces of substances that are harmful for coeliac sufferers on our premises. Our professionalism is guaranteed by government authorisation that allows us to produce fresh, gluten-free pasta, and means we must undergo strict checks, which are carried out regularly by the relevant authorities.